Share Your Thimbles July 2010 and the lucky winner is ...

This month we had seven participants who shared their thimbles with us and that is a great improvement compared to the last month however, we had two new people, too.  Just great, isn't it?
Before announcing the winner of the lucky draw, I would like to tell you about how I draw the winner firstly.  You have been seeing the strange combined ladder like pictures for months and might have wonder what it was.  It's called "amidakuji" in Japanese and it's a quite popular way to draw when the participants are small enough.  Although I assigned the number from left to right, if the participants are present they can choose who get where, and you can draw for the multiple prizes at one time. 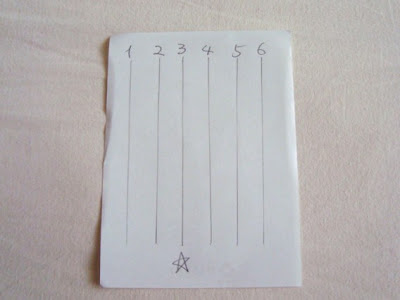 The number was assigned on the top and the prize was set at the bottom.  (we had six people who entered the draw although the total participants of the photo sharing was seven) 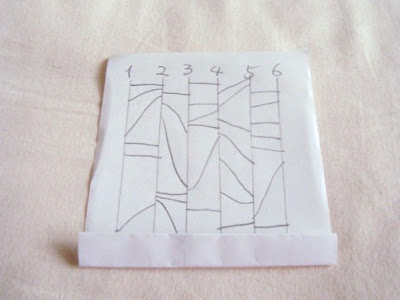 Then added the horizontal lines and each person followed the line descending, although sometimes it may involve uphills. 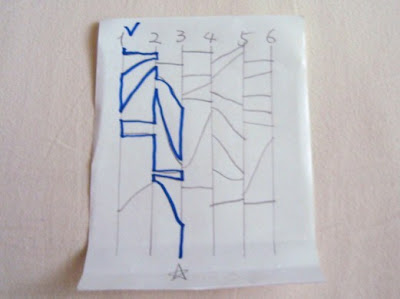 and the winner of July is number 1, Pat of palsu34 who shared two of her lovely thimbles with us.  Thank you all who participated in the photo sharing this month, and you, too, who visited the Flickr to admire their works.  I am hosting another photo sharing from tomorrow.  I would love to see more people joining us there.
Posted by Chloe Patricia at 18:01 No comments:

Keep It Simple - how I make my thimbles 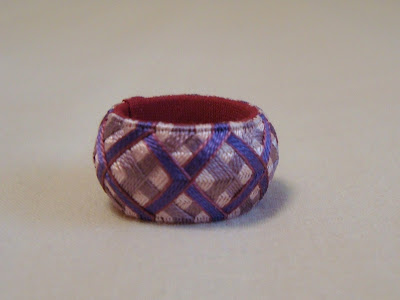 When Debi listed this design for last week's Thimble Thursday of her weekly posting, I just had to make one for myself, too.  Looks very pretty and advanced design yet easy to make.  You can find design interpretation and instructions on Debi's Temari Train of Though, although the current post is about her recent temari (real beauty I might add) so you have to scroll down a bit.

Debi's  instructions are very detailed and easy to follow, but 28 sections with period of 8 sections sounds very intimidating and the design diagram looks rather complicated, especially for the people who are new to thimble making.  So let's simplify it a bit, shall we?

The above is the design diagram, with all the 28 sections with 4 paths.  I forgot to put the numbers beside the arrows but I hope it's clear enough without them.  Debi stitched first path through firstly then proceeded to the third (the second pink one in the picture) but I prefer to stitch the paths alternatively as much as possible so the arrows in pink are placed at the same plane to signify it.  The gist of stitching instruction is stitch the first and third paths alternatively until each sections are filled, then fill the second path, and after that,  fourth path.
Please follow the pink line across the diagram and you will find it makes two rounds before coming back to the starting point.  The design period is 8 sections, but actually second half of the period (4 sections) is simply the second round of the first half, in another word, one row of stitches consists of two rounds and that's why there are only 4 starting points.
Now, let's remove everything else beside the first path's stitching:

You can now clearly see what you are going to do with the first path.  Are you ready to start stitching?  Before threading your needle, please ask yourself;
"DO I REALLY NEED A 28 SECTIONED MARKING PAPER FOR THIS DESIGN?"
The answer is no.  Please don't think I am out of my mind because of so hot and humid weather down here.  I know what I am talking about.  Let's simplify the diagram further and you will know what I mean;

You see, all you need is a simple 7 sections.  But what about the starting points of 2nd, 3rd, and 4th paths, no markings for them?  You don't need them for this particular design.  You might want to consider this design 7 sections with 4 sub-divisions, instead of 28 sections, each  sub-divisions represent the paths of stitching.  Make sense to you?  If it doesn't, hear me out firstly before giving up, this is not as complicated as I make it sounds.

When you made the second round of stitches of the first path, the threads laying on the thimble body crosses each other and that crossing points are always made in the exact half way of the section, and in this way you will know where to start the third path.  I put the vertical green lines in the diagram above to show where the half way points are, and third path's thread in red, but not finished all the way because it makes the diagram too busy.
Now look at what it looks in real thimble ( I used green thread so that it shows clearly although the diagram remains in pink); 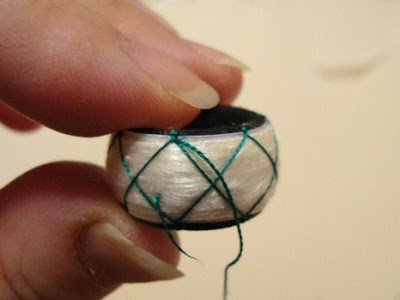 I finished the first row of first path and was going to start the third path. 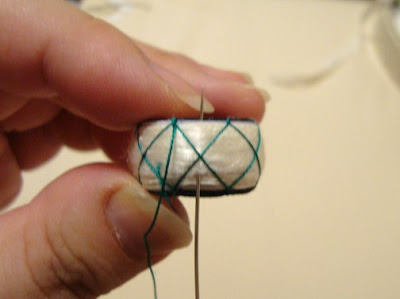 You can see ( I hope) now what I mean the crossing points show you the halfway point of the section and it's where you start your third path. 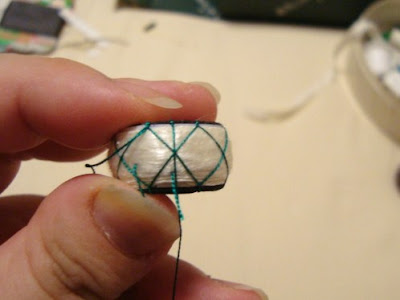 I made an initial stitch and was going to make a down stroke stitch. 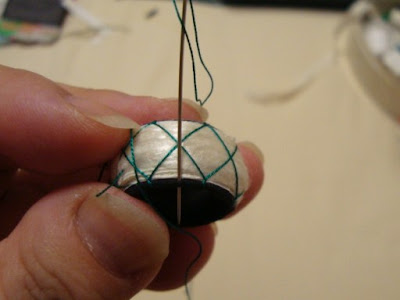 In this way, you continue stitching until you made all the stitches of the first row of the third paths. 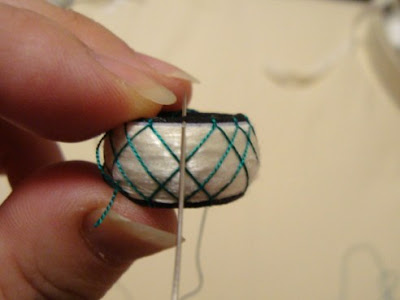 As you see, it's getting easier as you go, because when you start the second round, you have now both the central crossing and the stitch you have already made when you stitched the first round to hlep you to determine where you make a new stitch. 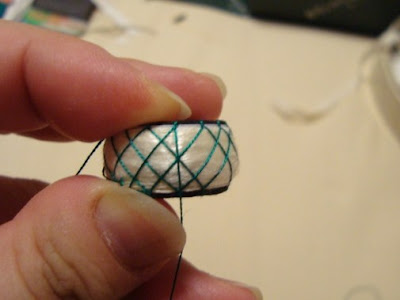 You can always check if the stitch was made at the right place by placing the thread vertically. 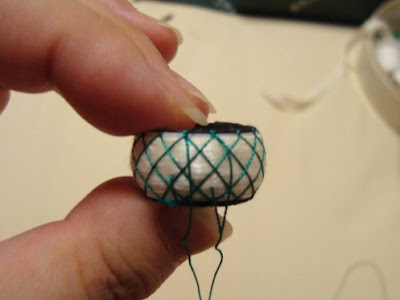 Here, I got myself a nice 14 sections with only 7 sections markings

and this is the diagram (with 28 sections) to show what I have done so far.  Now the question is how do I know when to stop stitching for first and third paths. 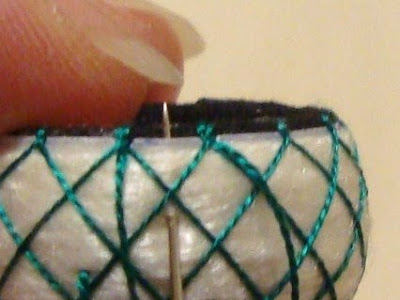 The answer is the same way when you determined the points where to make the stitches of the third path. 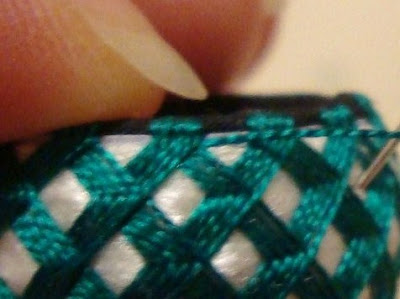 This is where I had to finish the thread and start the second path. 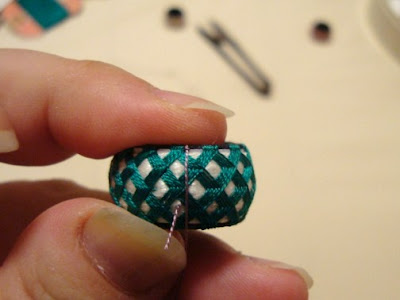 start stitching the third path until all the remaining space is filled ... 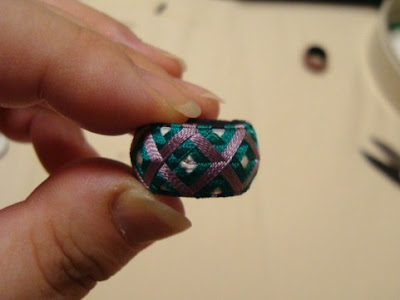 like this and then there is only fourth path to go.
I have finished the thimble, but didn't take a photo of it to show you, mainly because I didn't like the finished colourings of it.
Although I used the threads crossing points to determine where to end stitching the first and third paths, but if I knew before hand exactly how many stitches I make in one section of 7 sections thimbles, I could have just simply divided the number of the total stitches in one section in four (because of 4 sub-divisions) and didn't need to worry about where to stop. 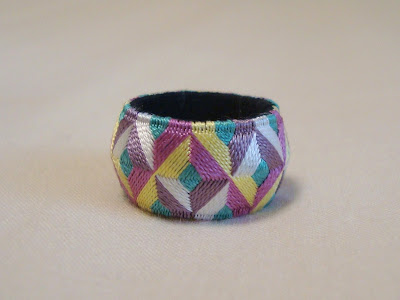 This is one of the latest thimbles I made and it has 24 sections with 6-section period.  As you guess, I didn't use 24 sectioned marking paper.  I interpreted it as 8 sections with 3 sub-divisions.  As I had to divide a section into 3 sub-divisions, I was not able to use thread crossing points as a guide as I described above.  Instead, I used the "divide the number of the stitches in one section" method.  I (almost) always make 20 stitches when my usual thimble has 8 sections.  So I knew a sub-division had to have seven stitches each and although it made it total 21 stitches instead of my usual 20, it was still an easy adjustment.
This is why I always encourage you to count your stitches.  Counting is essential to make stripes but solid coloured sections could use your counting stitches, too.
For those of you who wonder how to make the above design, here is an instruction (no diagram, sorry);
1 start stitching as if you are making bi-colourd scales in the same colour for both paths for the diamond shaped part in pale blue until the one third of the section is filled.
2 using four contrasting colours, frame the diamonds by forward stitch for second sub-division, back stitch for third subdivision for both 1st and 2nd paths until all the spaces are filled.
For those of you who are interested in purchaing it, here is a link to my shop.
The monthly photo sharing at Flickr, "Share Your Thimbles" is still open.  There are only two participants so far.  I look forward to seeing yours, too, there.
Happy stitching!
Posted by Chloe Patricia at 16:28 9 comments:

Email ThisBlogThis!Share to TwitterShare to FacebookShare to Pinterest
Labels: how I make my thimbles, thimbles 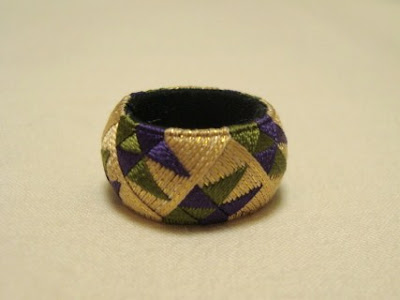 Here are the rules, as same as last month:

1. The thimbles or any other rings (or even not in ring shaped ones) you are going to share with us have to be the ones you yourself made. No borrowing. I don't think any of you will cheat but I think I should make it clear and I hope you understand it and not be offended.

2. Although the name of the Flickr group is "thimbles", you can make your rings in any size. As small as focal bead of the pendant, or as big as a bracelet, or even bigger if you like.

4. Your thimbles or any rings have to be made using only forward stitches at this time. No back stitches or weaving.

5. You can use any materials, in any colours.

6. You have to state the size of the mould on which you formed the bases in the description field of the photos. Please also mention what padding material and thread you used, too. In case you use the ring base from my thimble making kit, it's 50mm in circumference, floss silk for padding, and Fujix Tire size 9 silk hand sewing thread.

8. The closing date is 21st of July, Japan time. Please note that we are 9 hours ahead of GMT (Greenwich Mean Time) in Japan.

Now, you can start uploading your photo from here.


We are going to have a lucky draw afterwards. The prize is the thimble, my contribution for this month, shown above. My thimbles are working tools as a rule, however, I used gold thread for this one and therefore it is not suitable for actual sewing. In order to enter the draw, please leave a message at discussion board. Although you can upload as many as you like but you can only enter the draw once.

This is the eighth photo sharing since I started hosting it last year and there have not been many participants. As a result there may be an occasion, like last month, when the same participants will won the prize more than once. Last month's winner, Rebbecca, who had won the previous month, too, very generously offered to share the prize since there were two thimbles however, I think I had better to stick to the rules as I do not wish to set a precedent. It's not very fair a handful people won repeatedly however, it's not fair, either, to change the rules. I will draw one winner regardless of the past winning records and that is that.

I sincerely hope you understand. However, if there are many more of the participants, the repeated winners will not be such a big issue. Please, please join us at Flickr. I know for the fact that many of you make thimbles, don't be shy.

FYI, there are "first thimble" kits as well as medium pin cushion kits in five colours available at my shop.
Posted by Chloe Patricia at 21:29 3 comments: