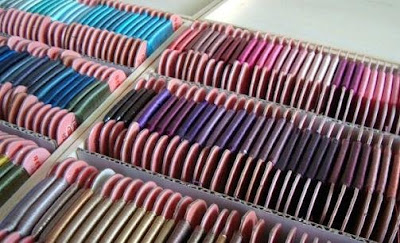 I had bidden these beauties on-line last week and they finally arrived today! They are silk threads for hand sewing and I use them for my thimble (and other rings) making. They are not new ones but dead stock items and I didn't got them neatly in the boxes as shown below picture. 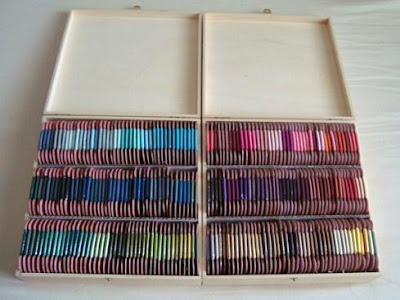 As a matter of fact, they all were a bit dusty and in a sorry state, so to speak, being just dumped in a also dusty cardboard box. I wiped all card spools, one by one, with a damp cloth and spread them out on a table to air them. Then I put them in my own boxes with dividers which I made from a new cardboard. I should have taken a picture of them when I first opened the box so that you could see "before" and "after".
Storing in these boxes as they are is a temporary solution. They are the boxes the Sacher Torte came in and they are beautiful enough that I could not throw them a way but rough around the edges literally and I have forever been planning to do make over. Since I have found what I want to put inside, I have now no excuse not to prioritize it on my very long "to do" list. Hopefully soon, they will be reborn as fabric covered boxes with much neat divider than the one they are currently equipped.
Posted by Chloe Patricia at 13:09 3 comments: